Yesterday, the thermometer in the car said 100 degrees.....but the calendar says it is Autumn!
Go figure! 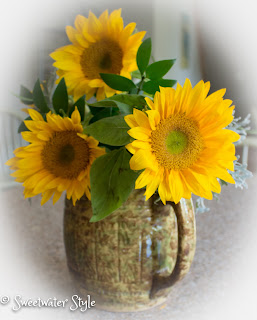 I have been gradually switching the decor around Sweetwater to reflect the season....NOT...the temperature!
The family room was first....and honestly it took about 30 minutes to go from Summer to Fall!

The chair covers on the rattan chairs are now back to a muted color scheme. (I do love slipcovers for a quick change!) 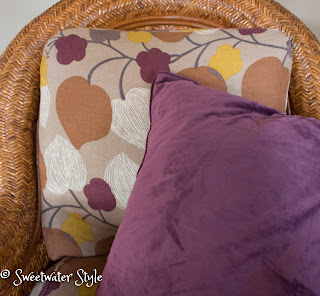 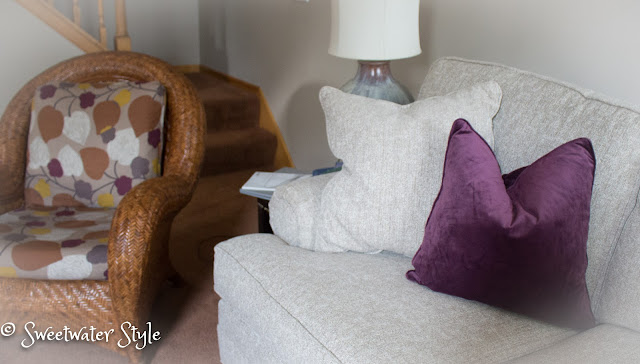 I am totally obsessed with twinkle lights!
I love the battery powered strings that are on tiny copper wire.  The wire bends around to twist through the stuff and almost disappears.
A search on Amazon finds a really wide variety of these fun strings for a very low cost.  I have also seen them at Tuesday Morning and Dollar General.  You really want to have these in your decorating stash!!! 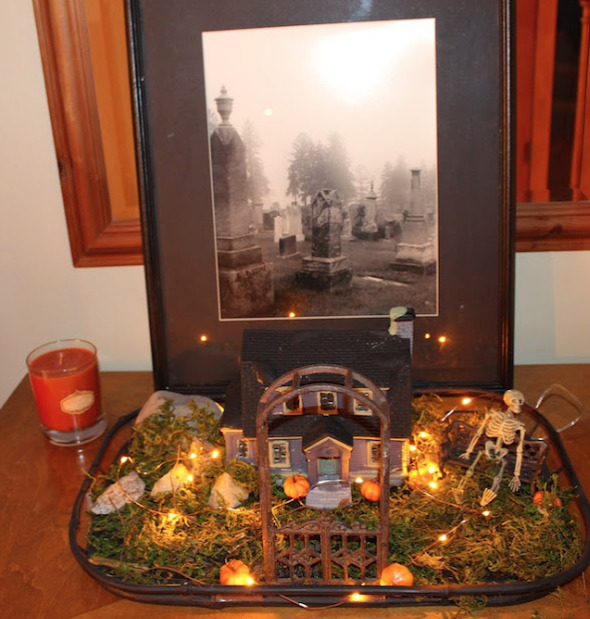 I used a string to light up the Spooky Fairy Garden last season.....I will definitely do that again when October rolls around.

Look at some of the fun ways that other people have used twinkle lights:


HMMMM....I could probably weave a string into my wine crate!


Hope this inspires you to do a bit of fall decorating and add some twinkle lighting to your projects...

I love the quote from the movie "You've Got Mail" when Kathleen announces that all will be fine, but "in the meantime, I'm putting up more twinkle lights."

Have A Wonderful Day!

Link Parties
Coastal Charm
Posted by Sweetwater Style at 11:48:00 AM No comments:

Email ThisBlogThis!Share to TwitterShare to FacebookShare to Pinterest
Labels: 10 min. project, collections, decorating, Halloween, use what you have

One of the best reasons to shop thrift stores is to build collections.
A wise woman would probably choose ONE thing to collect....but no one ever said I was WISE!

So what do I collect?
Mr. S would probably ask "what don't you collect.


Copper, Silverplate, Fitz and Floyd, Red Wing and Haeger are just a few of my favorite collectibles.

When collecting is healthy, the display or storage of these things does not impede the use of active living areas of the home. When a collector expands acquisitions beyond well-defined collections and loses the ability to keep these possessions organized, it becomes a hoarding problem.  NY Times

Back to the main topic of the post....the versatility of white ceramic! 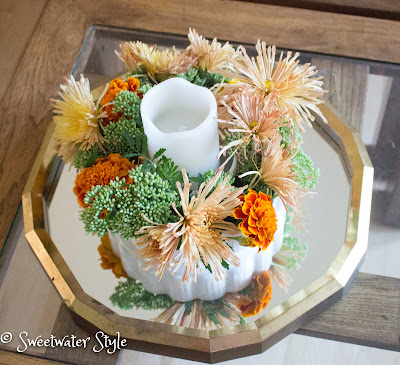 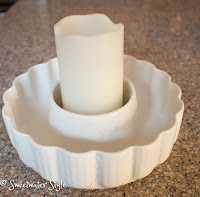 It has a center hole that can hold a candle.

The shallow ring makes it easy to put short stemmed flowers all around.

Using a mirror to set a vase on is a fun way to add "double" the impact.

How to get this look?

Keep an eye out for pans like this at the thrift store.  You can give them  quick coat of spray paint...I would probably do white or beige...then you have a versatile vase of your own. 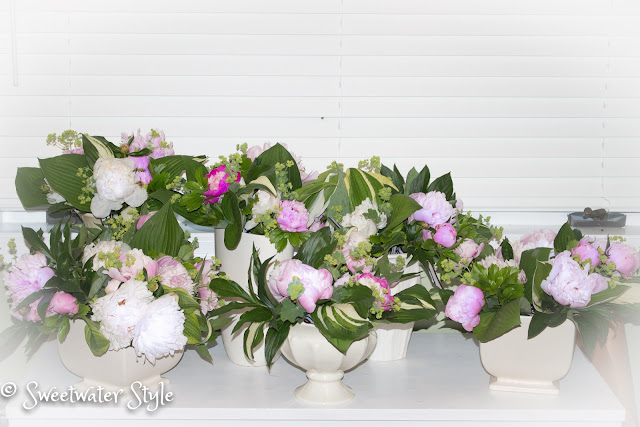 This photo shows the Haeger pottery collection.  The peonies are actually small bouquets that were used as favors for the Sweetwater DIL's baby shower.

How to get this look?
Never go to the thrift store without looking at the vases.  Then pick a color or style that you like and keep adding to the collection.
Whether you keep them in a cupboard....boxes....or on display, you will have a way to display your pretty arrangements. 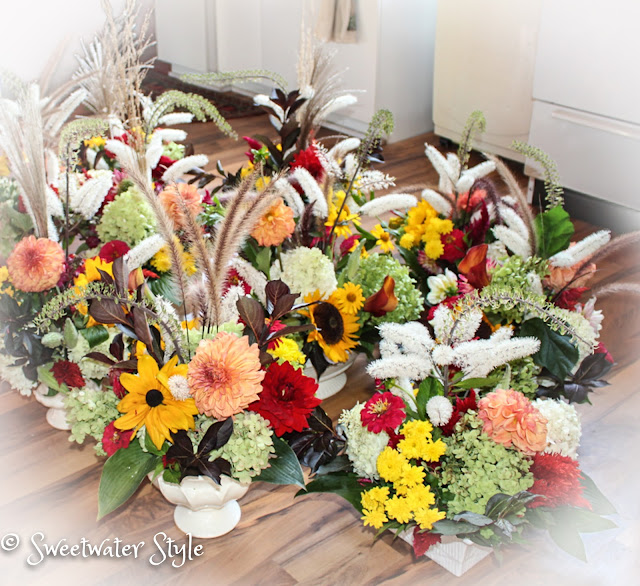 Here are those same vases used for table arrangements for a wedding reception in an old barn. 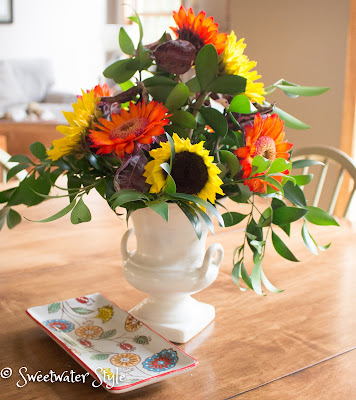 Keep your eye on the lookout for this classic urn shape.  Flowers almost arrange themselves when you have this as a base. 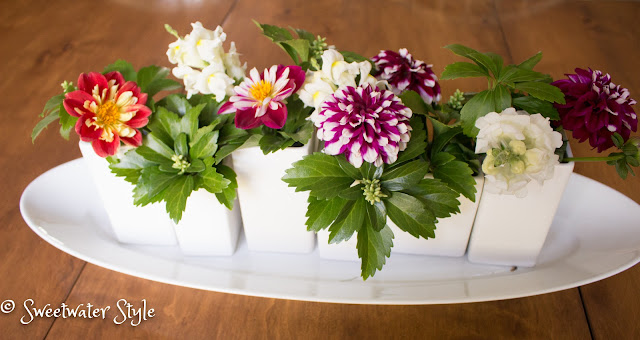 This collection of white ceramic is not any fancy brand....and all of the little rectangular vases were $1 at Goodwill.  The platter is one that I have had for forever!  What an impact for not so many flowers! 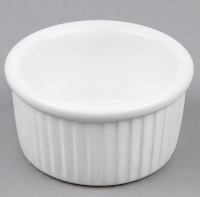 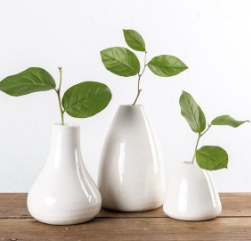 How to get this look?

I think IDEA has these little vases or something like them....but of course I couldn't find them on the web site.
You could use little ceramic ramekins like these:

These are from a restaurant supply company if you can't wait to score a thrift store find.

The whole idea is a cluster of similar, small vases on a tray....so simple!

Back to that whole collecting thing....I am struggling a bit to figure out how to display this particular collection.  I want it available.....so I opted for a shelf in the lower level....who knows how long that will last! 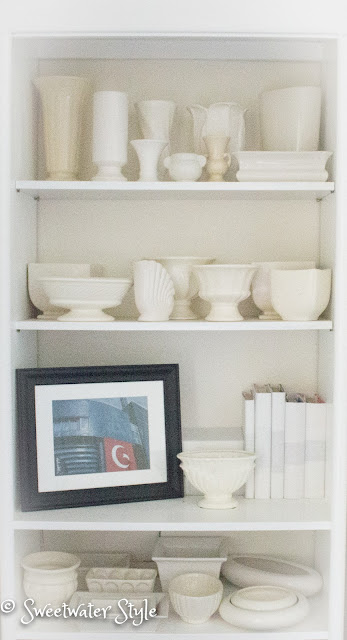 Oh my....looks like I don't have much room for any new pieces!

Happy Collecting!
Happy Flower Arranging!
and
Have A Great Day!

How To Build DIY Industrial Shelving

All great DIY projects have a back story to them.
This is the story of the DIY shelf over the television in the Sweetwater family room. 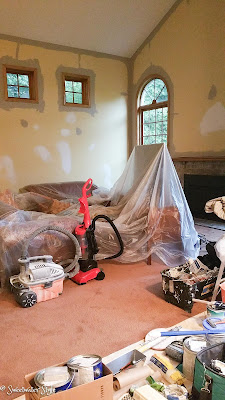 Once upon a time in the "Sweetwater Castle" the "Queen" decided it was time to repaint. 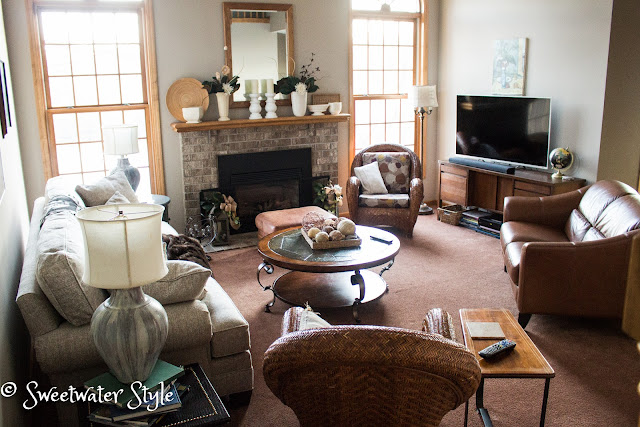 With the help of a wonderful painter....the yellow walls became a beautiful "griege" color.

All was well in the kingdom of Sweetwater.....

UNTIL....the "Queen" noticed the big blank wall above the television.

"This will not do!" she decreed.

She called for advice from the "Princess",  who suggested a floating shelf as the "crowning" accent for the wall.

"It shall be done," commanded the "Queen".

What follows is the "real" story behind this fairy tale! 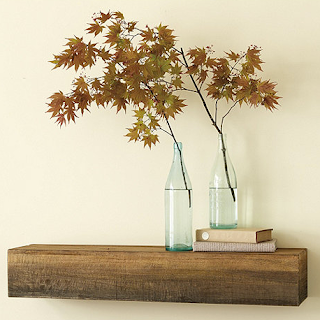 I was thrilled when the Sweetwater Daughter gave me the perfect shelf for Christmas.....
well...since it was on back order....she gave me a "picture" of a shelf!

The deal was.....the shelf never arrived.
With much follow up and a bit of confusion, the order was cancelled.


Now we are ready for the DIY part.
I decided I wanted to have the look of the exposed galvanized pipe and board shelf. 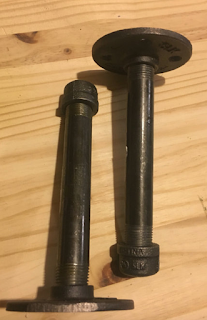 Mr. S ...or the "King" decided that it would be almost the same price to order the pipes already made as opposed to piecing them together.  We got two pipes from the OverTheLedge Etsy Shop. 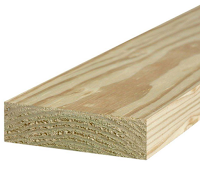 After a couple of months.....we headed out to get the board.
That meant a trip to HomeDepot and Menards.....
We bought stain too.


*Disclaimer:  Sweetwater household projects were necessarily interrupted by several trips and other diversions.

Then one day.....we decided it was time!

We measured carefully and then measured again and those pipes were fianally put up!

We went to get the board out of the garage to try it out before sanding and staining.
OH MY! 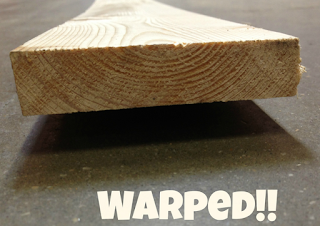 And...we learned that there is no way that a board from a big box store can age and stay completely flat!

He purchased a lovely piece of red oak that hardly needed any sanding.
It was cut to size....and stained.

This board is PERFECTLY flat and straight. 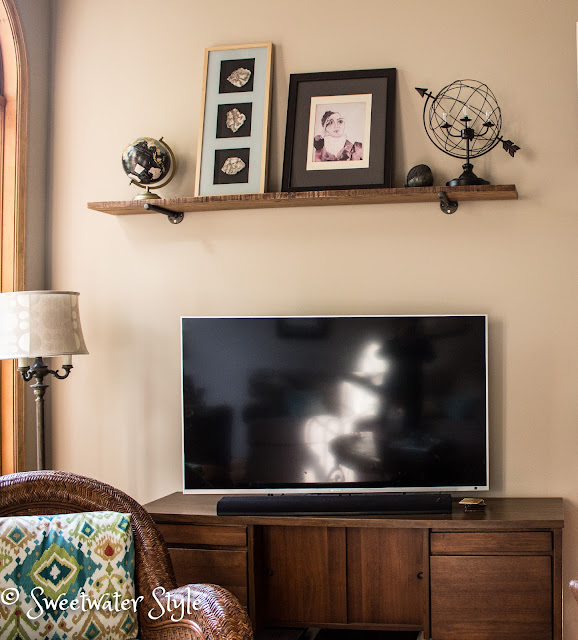 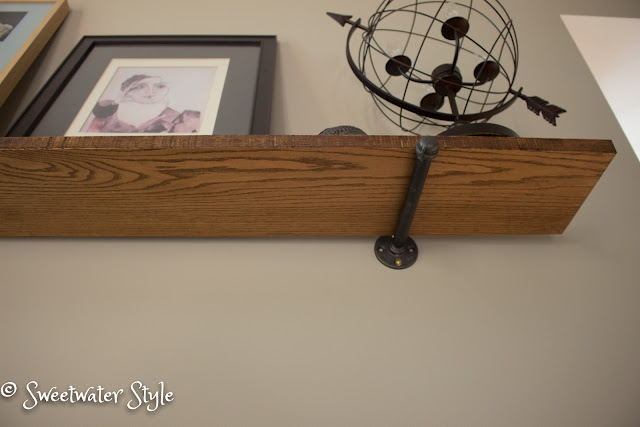 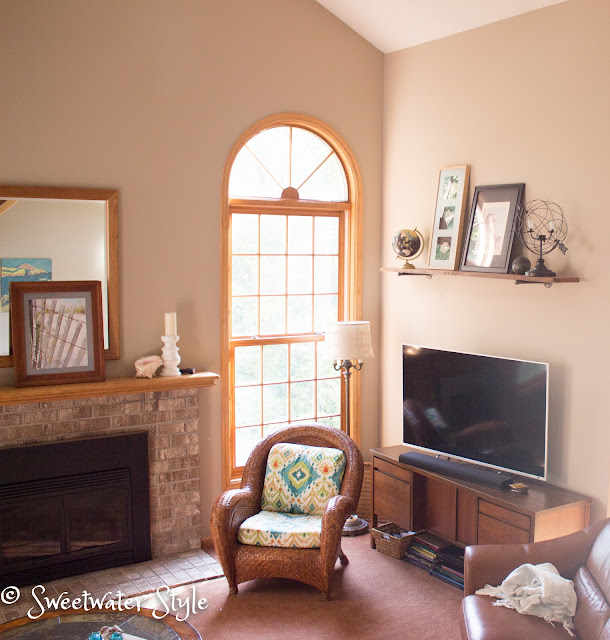 This project was really not that "thrifty".   You could probably buy one from a store for about the same or less cost.
The lesson learned....do your research about whatever shelving you decide to use for whatever project you are doing!

If you do want to tackle this Industrial Shelf look for your house: Great Tutorial...step-by-step...clear and concise.  Cherished Bliss has done a way better job of the process than I ever could.  (Especially because I never remember to take photos during the project!)

The REAL moral of this cautionary Fairy Tale is:

Have A Wonderful Day!